Riding in Style: The Campbells and their Chariot


Schenectady resident Daniel Campbell immigrated from Ireland to Schenectady sometime around 1754. According to historian Austin A. Yates, Campbell was "possessed of small means but on his arrival, he commenced as an Indian trader, with a pack upon his back, and by his native shrewdness, great industry and remarkable economy." He built his fortune by trading with local Native Americans, Schenectadians, and by purchasing soldier's rights to land after the American Revolution. Campbell married Engeltie "Angelica" Bratt after he immigrated to Schenectady. Campbell made quite a name for himself as a trader in Schenectady and by 1762 was able to construct his mansion on State Street. Campbell was also a close associate of William Johnson who was known for commanding Iroquois and colonial forces during the French and Indian Wars in the mid-1700s. Campbell would often entertain Johnson at his State Street mansion when he visited Schenectady. 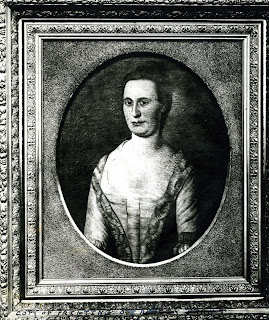 How Daniel Campbell gained his wealth is evident from his letter books which we have at the Grems-Doolittle library. He traded animal skins and furs, liquor, shrub (the fruit and vinegar based drink, not the foliage), various other goods, and most importantly, land. He had contacts with prominent merchants in Detroit, Montreal and London, among other places. There are several letters in his letter book that deal with people trespassing on his land, one biting letter from December 16, 1773 to William Brisby shows that Daniel Campbell was not a man you would want to cross. An image of the letter with a transcription can be seen below:


"Sir, I have sufficient proof that you have this winter cut 150 saw loggs of my land about a mile from your house for which villainy you may be assured I will prosecute you as the law directs if you do not immediately come and make me payment for the full value of every logg you have cut or caus'd to be cut for your deceiving me in this manner you shant have one acre of land from me altho I was determin'd to have given you a lease. If I don't see you or have proper satisfaction from you soon  you may expect the consequences for go where you will I shall have you taken. I am, D.C." 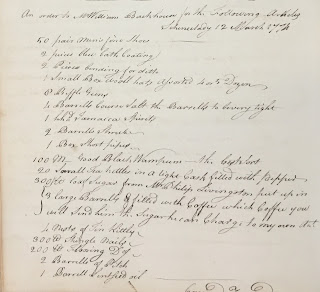 Other letters refer to Campbell suing people who owed him money (sometimes threatening to arrest them), invoices for various goods, and letters about general business matters. There are very few letters of a personal nature, but from letters like the one shown above, you can get a sense of Daniel Campbell's personality. These letters show how shrewd Campbell could be in his business dealings and give an indication as to how he amassed his fortune. The letter shown on the left gives an example of the types of items Campbell was selling in 1774. They include, men's shoes, Jamican Spirits, pipes, salt, rifles, black wampum (the best sort), sugar, tea, pork and tobacco.


Campbell's wealth allowed him to buy a carriage for his wife Angelica in the 1792. Owning a personal carriage was a pretty big deal in the 18th Century. Carriages were heavily taxed as a luxury items and you had the added expense of hiring a coachman and maintaining a couple horses. Campbell's carriage was quite the luxury item. The carriage had two seats and a red Russian leather interior. It's build was similar to the European carriages that were fashionable at the time. Angelica's monogram was on both sides of the carriage, as well as the Campbell coat of arms and coronet. The carriage stayed in the Campbell family well after Daniel and Angelica died. The Campbell's had one child, David, who died in 1801. Without a direct heir, Angelica left much of the land to her nephew Daniel David Schermerhorn with the catch that he change his last name to Campbell which he did.

The carriage was kept by Daniel David Schermerhorn Campbell at the Campbell property in Rotterdam (the current site of Viaport Rotterdam) along with a 26 bedroom mansion that D.D. Campbell built. It was said that the Marquis de Lafayette rode in the carriage when he visited Schenectady in the 1820s. It passed from through the Campbell family until 1929 when it was offered to the historical society. The historical society declined due to a lack of space, the carriage simply wouldn't fit in the rooms of 13 Union Street where the SCHS used to reside. The carriage made its way to the Henry Ford's museum in Dearborn, Michigan where it was recently renovated by B.R. Howard & Associates.

The Henry Ford Museum has some very detailed photos of the carriage on their digital collections website. B.R. Howard & Associates also keep an online portfolio of projects they worked on. You can see before and after photos, and find out more about the Campbell Chariot at their website, http://www.brhoward.com/ross_chariot.html.
Posted by The Librarian at 10:32 AM