It's Not Easy Being Green's

This post is written by library volunteer Ann Eignor

There have been several songs written about Schenectady - "I Can't Spell Schenectady," It's Forty Miles From Schenectady to Troy," "Our Schenectady," and a few others. One of the most unusual is "Joe Green's Clothes Shop." 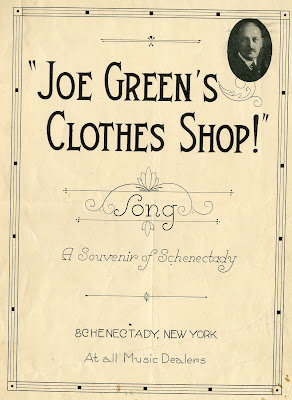 Credit for the music is given to Charles E. Benham, a local printer. The words are based on the text of the advertisement below which appeared in the May 22, 1924 issue of the Schenectady Gazette. Notice the ads for the two different Green's.

Joe Green's Clothes Shop first appears in the 1918 City Directory at 412 State Street. At that time George Green (possibly a brother or cousin to Joe) is listed as a tailor at that establishment. Since Joe and George were both listed as living on Summit Ave. so it seems likely that they were related. By 1921 it seems that George had his fill of being a tailor at Joe's shop and struck out on his own. In the 1921 Schenectady City Directory, George Green is listed as the President of Green's Clothing Store Inc. located at 306 State Street while Joe Green's Clothes Shop remained at 412 State Street.

It would seem that Joe Green was not pleased with this new competition who used a similar name, sold similar items, and was located just a block away. The words of the 1924 advertisement make Joe Green's dissatisfaction quite clear. Once the words became song lyrics in 1924, no one should have confused the two stores. The sheet music was probably given out as a "Souvenir of Schenectady" to Joe Green's customers, State Street pedestrians, and was available "at all music dealers." It was not a best seller.

In the battle of the Green's, Joe outlasted George. George Green's Clothing Store was no longer listed in the 1933 City Directory, but Joe's was still going strong. Was the song a deciding factor for Joe's success? We may never know. Joe remained in business until selling to his employee Jerome Oppenheimer in 1938. The store was renamed The Rochester Pants Company which continued in business for several years

"Don't be fooled - There is only one Joe Green!"

Posted by The Librarian at 9:56 AM