Ann Aronson is one of our library volunteers who is involved with our photograph collection. For the past few years, Ann has been scanning the Schenectady County Historical Society’s photograph collection, folder by folder. Having scanned the images, Ann then added them to Past Perfect, our digital database software. In many ways this is a very slow and tedious process. However, occasionally Ann stumbles across something interesting. 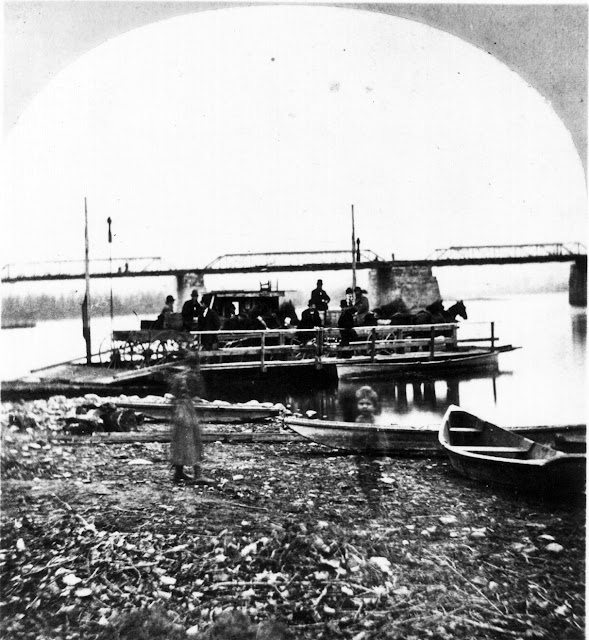 Last week she brought this picture to my attention.  The picture is of the old ferry which was in the Stockade. The ferry went between Schenectady and Scotia, led by a guy wire strung from shore to shore. Ferry Street in Schenectady takes its name from this ferry. The photograph probably dates between 1874 (when the “iron bridge” or “Scotia bridge” was built) and 1900. It was most likely from a glass plate negative.
But it is the image itself which is most interesting. If you look closely you will see the ghostly images of two children, a little girl on the left and a little boy on the right. The reason that the children look ghostly has to do with the primitive nature early photography. Early film needed a long exposure to light. So what most likely happened is that while shutter was open, the kids moved enough, and fast enough that they only made a partial image on the film, which is what created their ghostly look.
Posted by The Librarian at 9:28 AM

Email ThisBlogThis!Share to TwitterShare to FacebookShare to Pinterest
Labels: photographs, The Stockade District