When it is Spring in the Stockade, One Word Comes to Mind: Flooding

Spring may be just around the corner for us here in Schenectady, and in the Stockade that means one thing for sure, flooding. Every year, as the snow and ice melt on the Mohawk, the river levels rise and parts of the Stockade district are flooded. However, unlike the earthquakes that have just hit Japan and the tsunami in Hawaii, the flooding of the Mohawk is a predictable result to the end of winter.
﻿﻿﻿﻿﻿﻿
Here in the library the flooding of the Mohawk is well documented with newspaper clippings and photographs, including information that goes back as far as the 19th century. In 1832 a man named Louis John Barhydt was caught unprepared by the rising river and was forced to climb a tree, from which he was later rescued. The newspapers reported the worst flood in Schenectady’s history with two killed, hundreds evacuated and bridges destroyed by the end of March, 1914. In March of 1936 the water level of the Mohawk rose 17 feet above normal. Even my mother has stories of her grandmother refusing to evacuate her house on North Street because she lived on the second floor. She wasn’t afraid of a little water, and she had plenty of food, so she was staying put! That would have been in the 1960s and 1970s.
﻿ ﻿
If you are interested in learning more about the history of flooding in the Stockade, or if you would like to share your stories and pictures with us, come down to the Grems-Doolittle library and have a look through our files and photos. But be warned, if you come in March, you might want to bring some waders! 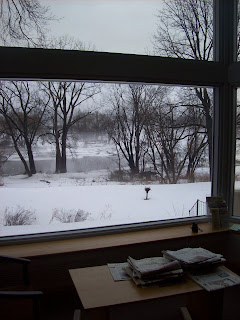