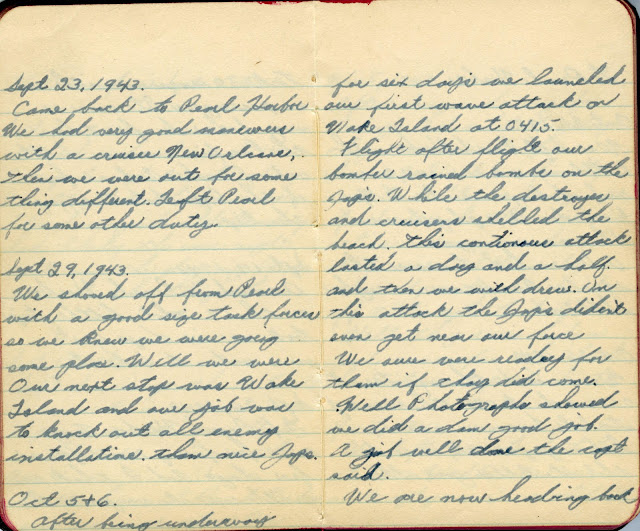 In addition to the journal, the Fazzone Collection includes photographs and military memorabilia. A finding aid for the collection can be found here.
﻿﻿
Posted by The Librarian at 1:16 PM 0 comments

﻿
Fire insurance maps were originally created as a means for insurance companies to underwrite policies for buildings that could not be inspected first-hand. Such maps are often referred to as "Sanborn maps" in reference to the Sanborn Company, based in New York City, that was responsible for producing the majority of fire insurance maps. Today, these maps are a useful resource for researching history, genealogy, preservation, urban geography and planning, and sociology.


Sanborn maps are bound in large volumes of numbered sheets. Each begins an index of streets and addresses, an additional index that includes the names of churches, businesses, and schools, and a map of the overall metropolitan area that indicates on which sheet to find certain blocks or areas. Each map sheet includes outlines of each building and outbuilding, the location of windows and doors, street names, street and sidewalk widths, property boundaries, building use, and house and block number. The maps also indicate information about each structure's building materials including framing and roofing, as well as locations of fire hydrants, water mains, gas mains, and often names of public buildings, businesses, and churches.

To maintain accuracy and reduce production costs, updated drawings of new or altered buildings or lots were pasted on top of the old maps until a new volume was published. Occasionally, maps of some blocks include a base "skeleton" map outlining lots and properties.

Helen Quirini and the Brother and Sister Cash Market

Many people in Schectady know of Helen Quirini for her work as a union organizer and community activist, but as a young woman, Quirini was also an entrepreneur.


In Quirini's memoir, Helen Quirini and General Electric: A Personal Memoir of World War II, she talks about her earliest work and entrepreneurship experiences following her graduation from Mont Pleasant High School in 1937:

"My brother had worked in a grocery store in the vegetable department and had than moved up to renting a concession in a meat market. I worked part time for him and then the store owner who ran the meat and grocery sections needed a 'delivery man' who also worked in the store. I applied for the job and with some apprehension, he hired me. Some of his customers did not like the idea because I wore slacks and besides this was not the traditional 'womens' job. The job was tiring because it seemed that all the customers lived on the second or third floors of the houses. After a while, they accepted me and even asked me to have a cup of coffee which I refused because I had other deliveries to make.

My brother and I then decided to become entrepreneurs and opened the "Brother and Sister Cash Market". We sold bakery, vegetables, and groceries. My brother's job was to get up at the crack of dawn and go to the farmer's market to buy vegetables and my job was to pick up delicious bakery from Scotia and bring it to the store for sale.


I remembered with a smile about our first day of operation. The bakery was hesitant to sell to us because we were so young. So to prove to them that we were reliable we decided to get orders for over 25 pies. We ended up with four times that amount. The bakery had to hire extra people to bake these pies and we worked overtime to deliver them. We didn't make any money on this deal, but we did prove that we were 'reliable'. We worked 7 days a week about 10 hours a day. I made $12 a week and gave home $10 for room and board. It was hard work, but we liked the idea that we were our own bosses. We were forced to close our store because of the difficulty of getting supplies because of shortages and the war clouds over Europe."

The Quirini Collection includes awards, biographical information, material related to the Schenectady County Department of Senior and Long Term Care Services Advisory Council, a copy of the memoir quoted here, and numerous family photographs. A finding aid for the Quirini Collection can be found here.
Posted by The Librarian at 3:22 PM 0 comments

I'm excited to come on board as Librarian at the Grems-Doolittle Library. During my first few days here, I have been warmly welcomed and helped enormously by our wonderful volunteers. I have also had the opportunity to meet several researchers and members of the Society, and I look forward to meeting more.

In my most recent experience before coming to the Library, I worked as a Library Assistant at Albany Public Library's Main Library. I have also worked as Project Archivist for the Adirondack Museum, where I processed and cataloged a number of collections, including the personal papers of Clarence Petty and Richard Lawrence, two of the “founding fathers” of the Adirondack Park Agency. Additionally, I served as Project Archivist at Bennington College, where I arranged, described, and preserved college records relevant to the documentation of the campus’ historic buildings. My appointment coincided with Bennington’s 75th anniversary, which provided me with opportunities to field numerous queries and create exhibits about the college’s history. I have also volunteered at the Efner City History Center and served as an intern at the College of Saint Rose Archives and Northeast Parent and Child Society. I have also earned my degrees in the area, from the University at Albany. There, I earned a Bachelor’s degree in Women’s Studies and Africana Studies in 2003, a Master’s degree in Women’s Studies in 2005, and a Master’s degree in Information Science in 2007.

I'm beginning to get to know the Library's collections, and I look forward to sharing some of the highlights of our collections here on this blog. Please feel free to contact me with any suggestions or comments, or simply come in and say hello!
Posted by The Librarian at 11:34 AM 0 comments