Lewi Tonks: Physics with a Side of Social Justice

It’s funny how the answer to a research request can pop up long after a patron requests it.  Back in January a patron contacted me to see if we had any information on GE physicist Dr. Lewi Tonks regarding his work with the Schenectady Human Rights Commission and his creation of a revolving bail fund. I checked our (usually trusty) family files and while we had a file for Tonko, there was nothing listed under Tonks. I scoured our website for any mention of him, nothing turned up. I checked our catalog, books on GE, and newspaper clippings files, still nothing. I found a few news articles online and a bit about his work while at GE, but not much regarding his social justice work in Schenectady.

What caught my interest on the page were the words Discrimination in Housing written in bold at the bottom of page 436. The report describes a black woman who brought a case to the Human Rights Commission claiming that she met with an agent of an absentee landlord who showed her a house.  The next day a white woman asked about the house and the agent stated that the neighborhood had an “anti-black attitude” and said “When they move in we are liable to have riots.” This event happened two years after the Fair Housing Act was enacted which prohibited discrimination concerning the sale, rental and financing of housing based on race, religion, national origin and sex. The case made its way to the State Division of Human Rights and the owners of the property were fined $200 (about $1,200 today) and restrictions were placed on the landlord to assure that they would comply with the act in the future. I flipped through a few pages to see who gave this part of the report and it was none other than Lewi Tonks.

Tonks was a physicist who, before working at GE, helped develop a supersonic submarine detection for the U.S. Navy. He joined GE in 1923 where he researched thermionic emission, ferromagnetic, thermodynamics of surface films, and other projects that I had to look up on Wikipedia in order to understand what they are. In 1946 he started working with the Knolls Atomic Power Laboratory which was operated by GE for the U.S. Atomic Energy Commission at the time. At KAPL, he served as the manager of physics and also worked on the reactor for the nuclear submarine the Sea Wolf. In 1955, Tonks also worked on designing the first fusion device.  So, He was obviously working on some amazing projects in the scientific community, but he was also heavily involved with social issues in Schenectady.

After retiring from GE, he started volunteering for the Commission on Human Rights where he volunteered at least five days a week. In the 1970 report to the County Board of Supervisors, Tonks requests assistance from the Board, specifically in the form of increasing the salary for a potential executive director to assist the sole full-time staff member Anne Donnelly. Donnelly’s main duties were coordinating the activities of the Commission and the various committees of the Commission, writing reports and minutes, attending meetings relevant to the Commission, attending legislative hearings and workshops, among other things. So, she had a bit of a full plate working for the Commission. Tonks takes a bit of a dig at the Board saying “We are paying very careful attention to the caliber of individual whom we would ask to take this responsible role. We are hampered in this search by the low salary level established by the Board of Representatives.” In 1969, the chairman of the Commission on Human Rights compared the budgets and staff of the Schenectady Commission to others cities of similar size in New York. Niagara Falls had a slightly higher population than Schenectady in 1969, but the budget for their Commission on Human Rights was $38,000 compared to Schenectady’s meager $6,520. So the increase of that Tonks called for was a drop in the bucket compared to cities of similar sizes.

"He frightened and angered those who obstruct justice, and he exposed those who still give lip service to justice and peace. And because hope is so necessary to us all, I shall see in every tiny hard-fought victory for human rights and dignity, and off-spring of his spirit and vision. And I shall be grateful to Lewi, and glad." - Friend of Lewi Tonks, Peter Crawford

Dr. Tonks saw the budget increase and hiring of an executive director for the commission in 1971. Unfortunately, he died of a heart attack on June 30, 1971. In addition to his work on the Commission on Human Rights, Tonks was also involved with the committee of clergy and laymen concerned about Vietnam. His legacy lived on in the Lewi Tonks Revolving Bail Fund which was created by his family. The bail fund provided bail for people who could not afford it. In the 1971 annual report of the Commission, Anne Donnely stated that Lewi “died knowing that a director was being hired and that the job to be done was actually beginning. I am glad that Lewi Tonks chose to work with me – not only for what I learned from him but because our friendship deepened and added greatly to my life.”

Posted by The Librarian at 5:14 PM 0 comments 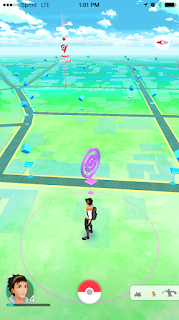 It’s no secret that the staff at SCHS is hooked on the Pokémon Go craze (see this Daily Gazette article, this piece on Channel 6, and this article on Bloomberg.com.) For me, the game touches on a nostalgic nerve as I played Pokémon when I was younger. It then combines that nostalgia with another of my favorite things, history. Many of the pokéstops in the area are places of historical significance and if you have ever walked around the Stockade you would know that many of the buildings have markers stating their historical significance. We’re hoping that by having these landmarks, buildings, and other historic sites as pokéstops, people will start asking questions about the interesting and sometimes weird history of Schenectady. SCHS has been hosting impromptu pokéstop walking tours of the Stockade to try and bring history to the forefront of the game and explain the background behind some of the more prominent pokéstops and gyms in the neighborhood.

When walking around the Stockade on my lunch break I try to take a look many of the historic markers on the houses around the neighborhood. One potential positive of the game is that it could get people to think about their neighborhood in a new light. Judging by the popularity of our tour and similar ones in other historical areas, there are people playing the game who are interested in learning about local history.

One that I just never really seemed to notice was on the corner of Front St. and Washington Ave. which also happens to be the closest pokéstop to 32 Washington (well, besides 32 Washington itself). It wasn’t until our pokéstop tour that I noticed that this house has a marker that states that it was the home of blacksmith Aaron Dickinson. But that’s not all! It also has quite a political history being the home of Schenectady mayor J. Teller Schoolcraft and John Prince, the merchant and Assemblyman of Albany County who Princetown was named after.

Whether your house is a pokéstop or not, tracing the history of your house can be interesting as you piece together the lives of people who lived in your house before you. It can also give you more of a connection to your neighborhood as you learn more about the people who lived there in the past and what the neighborhood looked like. The changing styles of architecture in your area also tell the story of how your neighborhood changed over the years. You also never know what sort of information you will turn up during your search. You may not find all the answers to the questions you’re looking for, but starting your house history can be very rewarding.

The Schenectady County Historical Society will be hosting a house history workshop on August 13th from 2pm to 4pm to help you get started with your house history research. After the workshop, you’ll be able to use the historical society’s library to use some of the resources that you learned about in the workshop. This workshop is free for members of the historical society and $5.00 for non-members.

Posted by The Librarian at 1:41 PM 2 comments