Finding the origin of place names can be a tricky business sometimes. In Schenectady County, the origin of some place names are more apparent than others. Glenville, Duanesburg, and Princetown were named after prominent people who lived there, namely Alexander Lindsay Glen, James Duane, and John Prince. Scotia and Rotterdam were named after places. Scotia, after the home country of Alexander Lindsay Glen, and Rotterdam after the port of Rotterdam in the Netherlands. Schenectady and Niskayuna are both forms of place names given to them by Native Americans in the area. Schenectady means "beyond the pines" or "over the pine plains" and Niskayuna means "extensive corn flats."

Checking out some of the hamlets in the area and we have Alplaus. Alplaus derived from the Dutch Aal Plaats which means place of the eels. Carman in Rotterdam was originally named Athens Junction after the junction of the New York Central and a railroad from Athens, NY. It was eventually renamed after Will Carman who opened a general store at the crossing. This all leads to a research question that I received recently. What was Hardin's Crossing, and where was it located? Was it a ferry or railroad crossing? Who was this enigmatic Hardin who had a crossing named after him? Some of these questions were easier to answer than others.


Specifics about Hardin's Crossing were difficult to come by. I quickly came to find out that it wasn't listed on any modern maps and articles that I found would refer to Hardin's Crossing, but often had no background as to why it was called that. We are lucky to have former Don Keefer's research files on Glenville and Scotia. Keefer was the Glenville town historian as well as the Schenectady County historian for a while and his research is very valuable when researching anything about Glenville. 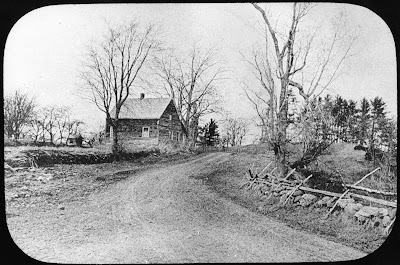 Keefer's research binder on the Beukendaal Massacre had a few article on Hardin's Crossing. It turns 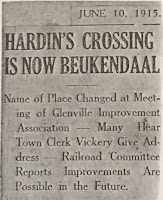 out that in 1915 both the schoolhouse and the area of Hardin's Crossing were changed to Beukendaal to commemorate the Beukendaal Massacre. The charge to change the name was led by none other than the Schenectady County Historical Society, little did they know that they would cause a bit of confusion to their librarian 102 years down the road. So that article solved the "where" of Hardin's Crossing which was very close to the site of the Beukendaal Massacre near Sacandaga Road.

I then went to our map files to see if there were any maps that might show the site so I could learn what the crossing part of Hardin's Crossing referred to. An undated map of the 10th School District of Glenville shows two railroads that cross Sacandaga Road, the Fitchburg and the New York Central Railroad. This map gave me some more definitive proof that an Hardin (unknown first name) owned property in the area and I also found out that the crossing was a railroad crossing.

The "who" was a bit more difficult to find out, I knew it was a Hardin, but finding out which one was tricky as none of the articles mentioned which Hardin the crossing was named after. The Hardins lived in Schenectady since the mid-1700s, but there weren't a ton of Hardins in the area. The Hardin family file in our library had a page from Cuyler Reynolds' Hudson and Mohawk Genealogical and Family Memoirs which gave a short history of the Hardin family and listed many of the Schenectady County Hardins. It turns out that there were two Hardins that had farms in Glenville, Sidney and Jonathan Tripp Hardin. The 1866 Beer's Atlas lists many of the property owners in Glenville and sure enough J. & S. Hardin were both shown on the map right near the crossing of Sacandaga Road and the New York Central Railroad. Jonathan Tripp Hardin would go on to live in Schenectady, but Sidney stayed in Glenville.

Sidney died in 1880 at the young age of 54. In a 1965 Raw Materials of History column from the Schenectady Gazette, Neil Reynolds states that even though the Hardin's Crossing was changed to Beukendaal, "the name Hardin's Crossing still persists." So Sidney Hardin's memory lasted a while after he died. Not being a native to Schenectady County, I wonder if anyone Glenville natives still call this area of Sacandaga Road Hardin's Crossing.
Posted by The Librarian at 1:22 PM 2 comments

Over the past year, there has been a lot of new research on Albany's "neighborhood that dissapeared." The 98 acre area that was torn down in the early 1960s and replaced by the Empire State Plaza. In a recent blog post (http://tinyurl.com/z7ooqy3), I learned that Schenectady had it's own lost neighborhood during an urban renewal project in the 1940s and 50s, the 22-block urban renewal project. This project was named for the 22 blocks around City Hall that would potentially be redeveloped to create more off-street parking, new street arrangements, and areas for business and residential use. The reasons for redeveloping this area were similar to the reasons for redeveloping the Empire State Plaza. The area was seen as a slum with tenement housing that wasn't bringing the city enough tax revenue. According to Christopher Patrick Spencer's thesis Shovel Ready: Razing Hopes, History, and a Sense of Place: Rethinking Schenectady's Downtown Strategies, the project evolved over time. The city initially wished to get more tax revenue from downtown, but as time went on the project changed to adhere to state and federal grant programs that required the area to be used for business and restricted use on residential projects.


An article in the May 24, 1946 issue of the Schenectady Gazette refers to a New York State survey on the needs of current residents of the 22-block area. They were looking at what sort of rent residents were paying, which businesses were located in the area, housing and family conditions. The survey was an attempt to see what sort of needs residents would want in a new housing development, but residents in this area did not want to be relocated or for their houses to be destroyed. In a meeting on February 26, 1947, residents of the fourth ward of Schenectady accused the city of lowering the assessed value of property in the 22-block. One resident stated that "We're not interested in the Town of Tomorrow--we're interested in this 22-block, our homes are in it. Our livelihood is in it." Director of traffic and city planning, Arthur Blessing, defended the 22-block plan saying that the plan was necessary in order to centralize Schenectady's business district and relieve traffic congestion.

By 1947, the plan for housing development in the 22-block was scrapped and Mayor Ten Eyck stated that "as soon as conditions permit, the substandard tenements and buildings in the 22-block area will be razed. The land will be sold to private industry with the covenant that the land may not be used for residential purposes." This land was to be left undeveloped for new businesses and industries to build and create taxable revenue for the city. It wasn't documented where all the residents of 22-block ended up, but some of them were relocated to Yates Village and other Municipal Housing Authority projects around the city, some of which was over two miles from their homes in downtown Schenectady.

Early renditions of the 22-block project (shown above included a plaza with a monument, green space, and tunnels underneath for traffic. The rendition bears a resemblance to the Empire State Plaza with City Hall on one side of the plaza, and a new train station on the other. Construction of the plaza never came to fruition and the land remained undeveloped for years. Only one developer came forward with a plan to develop the area in 1959, Lewis Empire-Plaza inc. They promised to put 10 million dollars into the development which included shopping areas, offices, and parking lots. Unfortunately, the company defaulted on its taxes and the City of Schenectady repossessed the land in 1963. There has been some development in the 22-block area since the initial razing of buildings and houses, but nothing like the initial renderings and hopes of those involved with the project. An article in the March 6, 1963 by Art Isabel stated, "Just about everything that could go wrong with an urban renewal and urban development project did in Schenectady."

There is a lot more to this story that can't be covered in a single blog post. For more information check out Christopher Patrick Spencer's thesis which you can find on the Schenectady Digital History Archive. http://www.schenectadyhistory.org/schenectady/shovelready/index.html.

Posted by The Librarian at 9:50 AM 0 comments