As I was uploading photos to our Sports and Recreation in Schenectady collection on New York Heritage, I noticed that there were quite a few unlabeled photos of boxers, baseball players, and musicians in these collections. The unlabeled photos in this collection led me to post a photo of an unknown boxer to Schenectady County Historical Society’s Facebook page to see if the collective wisdom of our followers on Facebook would be able to identify him. Sure enough, they were able to! We will be posting unlabeled and unidentified photos to an album on our Facebook page periodically for assistance in identifying people, stores, locations, buildings, and pretty much any other info that can be provided. Any information you all can provide would be greatly appreciated. You can find the album at this link.


This leads to our current series of blog posts. While digging up some information on some of the photos of boxers in that collection we noticed some photos of two Schenectady boxers Abe Feldman and Marty Servo. Servo was a champion welterweight who fought two matches against Sugar Ray Robinson. Feldman was a local pug who had quite a career and fought the likes of Jim “Cinderella Man” Braddock, Maxie Rosenbloom, John Henry Lewis, and other boxing greats of the 1930s. This post will focus on the life of Abe Feldman.


Abe Feldman was born in 1912 in Salt Lake City, Utah but moved to Schenectady at the age of six with his parents, sister and three brothers. Both Abe and his brother Jack liked to fight, and would often fight in the streets of Schenectady while people would throw pennies at them. In addition to boxing, Abe played running back for Schenectady High School’s football team. His skill in boxing and football was rewarded with an athletic scholarship to the University of Pennsylvania. Abe turned the scholarship down and decided to go pro. According to a 2005 Schenectady Gazette article by Jeff Wilkin, Feldman said that “I probably wouldn’t have learned much at college anyway and look at the fun I’ve had as a professional pug.”

Feldman started his pro boxing career as a light-heavyweight in 1932 with his first match against Julius Vigh in Brooklyn. “Honest Abe” as Feldman was sometimes called soundly beat Vigh and his next 15 opponents, going undefeated until his match against Charley Massera in 1933. Feldman would fight Jim Braddock a few months afterwards. This fight was depicted in the 2005 film Cinderella Man. Braddock broke his hand in three places on Feldman’s jaw and the fight was called off. This fight almost ended Braddock’s boxing career as it was the third time he broke it. Later on, Abe mentioned that he knew that Braddock was injured and went easy on him till the ref called the match off.


Abe’s biggest match was against John Henry Lewis in 1935. Lewis was coming off of a loss from Maxie Rosenbloom and he didn’t have much luck against Feldman either. The fight went ten rounds and Feldman won on points. The win made Abe the second ranking light heavyweight which was the highest ranking he would achieve. Unfortunately, he was never given a title shot.  During the fight, Abe injured Lewis’ eye. Lewis was able to hide this injury for four years when it was determined that the vision in his left eye was “almost nil.” Despite being blind in one eye Lewis would go on to defeat Bob Olin later on in 1935 for the World Light Heavyweight Championship.

Feldman wasn’t afraid of punching above his weight class and often took on heavyweights like “Two Ton” Tony Galento. Galento’s nickname didn’t come from his weight (although he usually weighed around 235-240 lbs.) but from an excuse that he gave to his manager as to why he was late for a match. “I had two tons of ice to deliver on my way here.” Galento was a larger than life figure in boxing who notoriously wrestled an octopus, and boxed a kangaroo and a bear on separate occasions to draw attention. A typical meal for Galento was six chickens, spaghetti and a half gallon of red wine, or beer, or sometimes both. According to Galento all other fighters were bums and what did Galento promise to do to bums? “Moider dem."
The fight occurred towards the end of Feldman’s career and reporters wrote that Feldman looked like he had been exhumed from the grave. Feldman took quite a beating from Galento, who despite his antics, could actually fight and had a wicked left hook.  Feldman was knocked down 3 times by the second round and after 30 seconds in the third, Galento delivered a wicked body blow that sank Feldman to his knees. The ref called the fight and Galento went on to challenge Joe Louis for the Heavyweight Championship. Later on, Abe would describe Galento as “the hardest puncher I ever faced.”


Feldman decided to end his career shortly after his match with Galento 1939 when he “started to duck a little too late.” His professional record was 35 wins, 14 losses, and 5 draws. He had 14 knockouts and was only KO’d twice. Feldman retired to live at his house on Pennsylvania Avenue in Schenectady with his wife Sadie and son Howard. He joined his brothers Jack, Leo and Dave in the coal business and worked as a coal salesman. Abe Feldman died at the age of 67 on June 20, 1980 and is buried in the Congregation Agudat Achim cemetery. He was honored in Schenectady throughout his life and often spoke at dinners and other sporting events where he was almost as entertaining as he was in the ring.
Posted by The Librarian at 10:53 AM 0 comments

This post was written by SCHS curator Mary Zawacki.

How do we tell the story of politics in Schenectady? 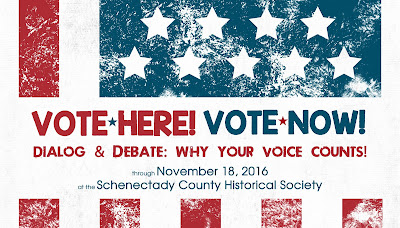 We asked ourselves this question last year, as we began putting together the grant proposal for our “Vote Here! Vote Now!” project. How do we tell the story of politics in Schenectady, especially during such a major year in national politics? How can we take the enormous, complex, and sometimes controversial political history of Schenectady, and make it an engaging, vibrant narrative?
We thought about this, and came up with a list (you wouldn’t believe how long) of possibilities. Exhibits, speakers, events, games, and more. Many of these we flushed out, and developed into programs you’ll see this year at 32 Washington and Mabee Farm. But then we realized something that changed our approach to the project. The story of politics – in Schenectady and beyond – isn’t one, linear, objective story. It is instead a tale formed by opinions, ideals, and the voices of thousands of Schenectadians. And the best way to dig into this history is to go to the source – the primary sources, let them speak for themselves, and then encourage our visitors speak to each other about their own political opinions. 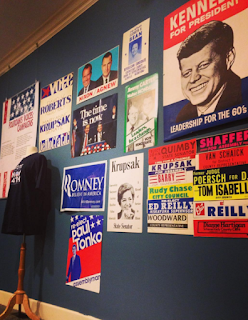 Though we have excellent primary political sources in the library and archives, as we began this project, our tangible collections in the museum were lacking. Sure, we could examine scrapbooks from socialist mayors (looking at you, George Lunn), pour over the records of the Dialogue Café (donuts with your discourse, anyone?), and discover the insecurities of Governor Joseph A. Yates in his letters from friends. Yet, something tangible to hold, display, and to inspire dialogue was missing. And then, serendipity struck!
As we were developing this project, Donald Ackerman, the longtime leader of the Schenectady County Democratic Party and a former county legislator, reached out to us. He had a large collection of political memorabilia, and wondered if we interested in acquiring it. Hundreds of buttons, bumper stickers, signs, and more needed a new home. Ackerman’s collection was unparalleled, made up of everything from matching Roosevelt and Hoover license plates to a Mayor Stratton bobblehead.  Here was our story, we realized. Centuries of political history documented in our archives, and then brought to life through our new Ackerman political collection. The perfect collaboration between our sites. 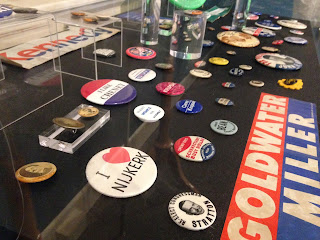 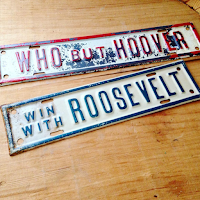 So we displayed our story. It’s on view now at the Schenectady History Museum at 32 Washington Ave. We selected a variety of pieces from Ackerman’s collection and on loan from the Schoharie County Historical Society to help us visually narrate politics, campaigns, and democracy in Schenectady and beyond. The artifacts are colorful and vibrant. They make you think about the tactics politicians use to shape our opinions of them, and the way campaigns play out. And, hopefully, they encourage you to consider your own opinions and those of your community members, as we move through another messy campaign season!


Included on display are artifacts that document just how complicated politics and campaigns can be. Take, for example, the election of 1840, one of the first truly messy ones in American history. 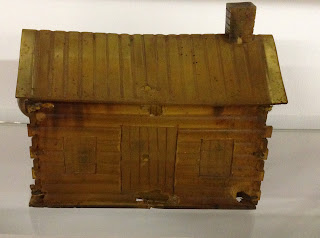 President Martin Van Buren narrowly defeated by William Henry Harrison, running on the Democratic and Whig Party lines, respectively. Van Buren’s first term had been plagued by an economic depression, and the campaign of 1840 saw him branded as a wealthy, out-of-touch snob. Meanwhile, this was the first time that the Whig Party had coalesced its full support behind a single candidate. Harrison was also wealthy and well-educated, but he was a war hero and enjoyed wide popularity as a result. 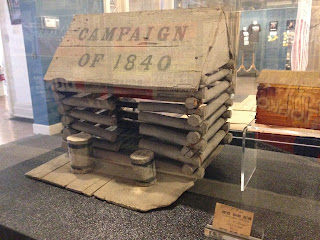 Harrison was also the oldest President up to that time, and Democrats mocked him for this; one newspaper quipped that if given a barrel of hard cider and a pension, he would “sit the remainder of his days in his log cabin”. The Whigs co-opted this detraction, however, declaring Harrison the “log cabin and hard cider candidate”, a moniker that swept the nation and gave him an image as a man of the common people. Log cabin dances were held in support of his campaign, miniature log cabins were built, and even jewelry was designed around the theme. Harrison was able to ride this image to victory, along with disapproval of Van Buren due to the poor economy.

How politicians speak to us through their campaigns is just as relevant today as it was in the 1840s. Consider what words politicians say -- or don't say -- to swing our votes in their favor. Do they use simple language, or are they verbose? What about rhyme and repetition? Are politicians vague or specific? At times, politicians use a bit of all of these. Carefully crafted campaigns strategize and determine which voice to use, and when.

It’s our hope that, as we move toward November, that participants in the “Vote Here! Vote Now!” project will be inspired to engage in political discourse, consider campaign tactics, and voice their opinions. And, if our participants elect to elect, that they consider the options. It’s important to speak out, to make your voice heard, and to vote. But it’s also important to understand, completely, what the issues are


Your vote is your voice. This election season we’re choosing state and national leaders, whose decisions and policy will have great effect on our lives as Americans. Why not take a stand voice your opinion?
Posted by The Librarian at 10:21 AM 1 comments