A Historian and His Dogs

In the July 1925 issue of the The Quarterly Journal of the New York State Historical Association Alonzo Paige Walton  was described as having "one of the most interesting collections of historical resources in the state." His collection included newspapers, clippings files, broadsides, and two letters from Sir William Johnson. Mr. Walton was known for his penchant for history and especially liked houses in the Stockade District of Schenectady. The Stockade was colloquially known as "Waltonville" due to his ownership of many of the houses in the neighborhood. The Waltons owned and renovated the historic Christopher Yates house on 26 Front Street. Mr. Walton was also involved in the Schenectady County Historical Society where he served as president from 1915-1916 and was a life member. Parts of his collection were donated to the Schenectady County Historical Society after he died in 1937. In addition to his love of history, Alonzo Paige Walton also had a fondness for Old English Sheepdogs.


Alonzo passed his love of history and Old English Sheepdogs down to his son Alonzo Paige Walton Jr. Alonzo Jr. and his wife Ettie owned several exceptionally cute Old English Sheepdogs and entered them in dog shows throughout the state. Ettie was voted to be the president of the New England Old Sheepdog club in 1943 and they were the heads of the Wildwood Kennel Club which was located in Saratoga Springs. We are lucky enough to have a few photos of the Walton's sheepdogs, Mistress Merrie O'Merriedip and Ramsrock Defender. 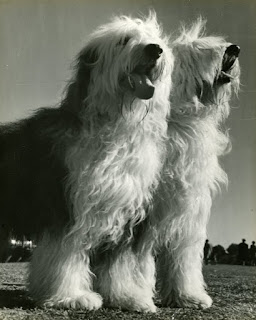 Mistress Merrie even had a rival in her brother Master Pantaloons who was owned by a family from Great Barrington, MA. They went up against each other in a 1941 dog show at the Wildwood Kennel Club but unfortunately for Mistress Merrie, she was defeated by her brother. Despite this defeat, she would have been proud of Master Pantaloons as he reached the finals of the working breed and eventually won best in show by beating a "snappy, well-conditioned boxer." Mistress Merrie, Ramsrock Defender, as well as the Walton's other sheepdogs would go on to win various competitions throughout the state.

Posted by The Librarian at 2:35 PM 0 comments