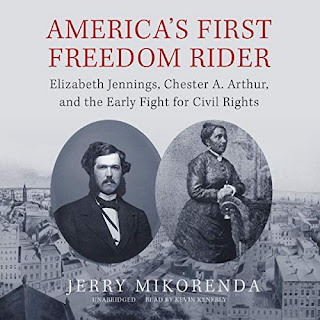 One hundred years before Rosa Parks ignited the modern civil rights movement by refusing to move to the back of a Montgomery, Alabama, bus, Elizabeth Jennings refused to leave a segregated New York City horse-drawn streetcar. She was thrown off and roughed up by the conductor and driver. She sued. Arguing on her behalf was 24 year-old Chester Alan Arthur, future President of the United States. As a result of the landmark 1854 case, Elizabeth Jennings vs. The Third Avenue Railroad, the New York City public transit system was desegregated. Jerry Mikorenda tells this story of this momentous court decision. But it is only a small part of his book: an account of the epic struggle for civil rights and dignity among the African-American population of New York City in the 19th century.

Elizabeth Jennings (1827-1901), 27 years old at the time, was a member of a prominent New York African American family long active in the civil rights and women’s rights movements. Her forcible removal from the streetcar received wide-spread attention in Frederick Douglass’s newspaper. Given the publicity and the prominence of the family, it is not that surprising that her father, Thomas Jennings, filed a lawsuit. What is more surprising is how Chester Arthur became the attorney arguing his very first case.

Chester Arthur (1829-1886), a genteel but impoverished 1848 graduate of Union College, chose the law as his profession. He started at the State and National Law School in Ballston Spa but left because of financial difficulties. Through connections of his father, an ardent abolitionist minister, he received an apprenticeship clerking at the New York law offices of Culver and Parker, a firm specializing in defending African Americans from the Fugitive Slave Act. When Culver, the partner who originally took the Jennings’s case, was elected to a judgeship, young Arthur was thrust into the role as trial attorney before the New York State Supreme Court in Brooklyn.

The Third Avenue Railroad argued that it was not responsible for the actions of its employees (i.e., the conductor and driver) albeit they were carrying out racist company policy. The neophyte Arthur won the case by citing an 1824 law that showed that common carriers like the Third Avenue Railroad were in fact responsible for heinous actions of their employees. The court awarded damages to Elizabeth Jennings for her pain and suffering. With that outcome, the Third Avenue Railroad decided to desegregate its line. For years afterward, in the African American community, February 22, 1855 was celebrated as “Elizabeth Jennings Day.” Arthur became a hero to the African American community.

The account of the trial is mostly based on newspaper reports. Unfortunately, two days before his death in 1886, Arthur burned his voluminous collection of private papers. These papers might have given us greater insight into the case. Although his presidential administration was whistle-clean, apparently he did not want his Tammany Hall activities to see the light of day. But that loss to the historical record could only delay but not stop the Elizabeth Jennings story from being told.

In 2007 New York City named a block of Park Row "Elizabeth Jennings Place" because of her many achievements on behalf of the African American Community, as ably documented in Mikorenda’s book. As for President Chester Arthur (1881-1885), a statue of him was erected in 1899 in New York’s Madison Square Park. And, of course, we know of the statue of Arthur on the Union College campus in Schenectady.