At the Grems-Doolittle Library we probably have more historic photos of State Street than any other street in Schenectady. This makes sense as State is Schenectady's main street and commercial hub and has been for quite a while. As such, there are a number of advertisements that have popped up on buildings over the years and it seems that one building in particular that would get plastered with ads for local businesses. 322 State Street housed several businesses over the years including the Boston One Price Clothing House, Evelyn Dress Shop, German newspaper the Deutsche Journal, the Schenectady Business College and various other businesses. This building is right by the train tracks, making it a perfect space to advertise. We've chosen some photos that show just how this area changed over the years. Some of these are undated, but a good way to get an approximate date is that if there is no railroad bridge over state, then it was taken prior to 1906.


For more photos from our collection, check out our New York Heritage page at https://nyheritage.org/contributors/schenectady-county-historical-society.
Posted by The Librarian at 9:14 AM 0 comments

The Mabee Farm's Great Fires - Revealed in Documents and by Trowel

This post was written by SCHS and Mabee Farm Archaeologist Ronald F. Kingsley.

Since the settlement by Europeans in New Netherlands in the 17th century, great fires have occurred in the Dutch village of Schenectady. It was burned in 1690 by a raiding party of French and Indians from Canada with the physical loss of buildings and lives, and again in 1819 when a fire burned a large section of the village between the Binnekill and Church Street (1). Even the Mabee Farm, only eight miles west of the village, has had its share of tragic fires over its more than three hundred year history. This article addresses the story of two known barnyard fires at the Farm.

To visit the Mabee Farm today the visitor would sense a pastoral landscape with a Dutch architectural style stone farmhouse with attached buildings nestled among trees, open fields, and a scatter of outbuildings in the barnyard along the Mohawk River. The historic Farm is located in Rotterdam Junction. It is now owned and operated by the Schenectady County Historical Society (SCHS) after it being donated in January 1993 by the last family owner, George Franchere. Generations of Mabees resided at the Farm until the end of 19th century when tenants lived and farmed the land. The last resident was the caretaker and Town historian, Scott Haefner.

The property, situated on the Third Flat or Woestyne (Wilderness), was acquired from three Mohawk representatives by the Dutch on 28 May 1670 in the presence of interpreters Robert Sanders, Jacques Cornelius [Van Slyck], and a schout (sheriff) J.G.V. Marcken. (2) In 1680 Governor Andros designated it a Patent and gave the land to Daniel Janse Van Antwerpen, for his service. He was an early resident of Schenectady and formerly from Beverwyck (today, Albany). On 22 January 1706 Daniel Johnson [Daniel Janse Van Anterpen], an English name among others associated with him, conveyed the western section of the property containing 63 acres and 79 rods to Jan Pieterse Mebie, then a resident of the village. (3) Over the centuries the property became a productive working farm. Cows and other domesticated animals along with a variety of agricultural products (grains, fruits, vegetables), poultry, and broom corn were raised for sale in the marketplace. (4)


Recollections Of Times Past for the Present

A single photo in the SCHS’s photographic collection, taken in latter part of the 19th century (circa 1880), furnishes us with a rare glimpse of the barnyard of the Farm. The outbuildings (a carriage house, shed, Dutch style barn, and English style barn) in the barnyard vary in size and orientation. Nearby the buildings dairy cows graze peacefully. (5) 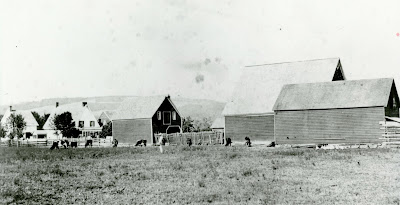 While these outbuildings are no longer visible on the landscape, an exact positioning and size of two buried stone foundations were discovered in August 2015. A summer drought created a cover of yellow grass over their buried stone foundations. Members of our SCHS/Mabee Farm’s Archaeological Services Program (ASP) team and some staff of the Farm were able to witness this event. The larger of the two outlines (60’x35’) was just north of the presently situated English carriage barn/restroom. The structure was moved and repaired in 2000 from the former Bradt Farm which was the adjacent property on the west. It is southwest of and nearby the reconstructed ca. 1760 Dutch style Nilson Barn from Johnstown. The ASP team measured and recorded the position on a large sheet of graph paper which provides the Farm an archaeological record. The general position was familiar to our team. This location had been found covered with the charred debris of a barn fire, believed to have occurred sometime in the 1970s.

Hartgen Associates and students and staff from the Community Archaeology Program-Schenectady County Community College (CAP-SCCC) had shovel tested various locations in the charred remains and adjacent areas from 1998 to 2003 in preparation for determining an apprropriate location for the reconstruction of the Nilson Barn and other buildings. As part of the Hartgen 1998-99 survey, staff had dug a small trench (TU-1) across an exposed section located on the north side of the former stone foundation. They determined that the foundation had served two barns from different eras, one barn built upon the other.

A second outline of a buried barn foundation (30’x25’) was exposed, that of the former Carriage Barn, 36 feet to the west of the buried burned Dutch style barn foundation. Both of these buildings appear on Chiamulera’s interpretative landscape drawing of the mid 19th century (1823-1885) farm. A subsurface ground survey was conducted in preparation for the location of the former Bradt’s Carriage Barn and now with a restroom currently in the barnyard. Also the study revealed a portion of a buried foundation of an English style barn to the southeast of the Dutch style barn and east of the proposed Carriage Barn, all seen in the photo above and also depicted in Chiamulera’s drawing. (6)

On December 6, 1883 The Schenectady Reflector reported that a great fire had occurred on November 21, destroying the outbuildings of the Mabee farm with a loss of $2,000. According to resident, Jacob S. Mabee, the buildings contained crops. (7) The loss was also reported in the Troy Daily Times on November 30 as being $9,000. (6) Family records now held in the SCHS archives (M-INS-2) revealed that they had insurance but only a portion of the loss was covered by a payment of $1,600. A copy of the insurance policy (No. 1178), purchased with the Agricultural Insurance Company of Watertown, New York, showed that it had been issued on March 26, 1873. The policy identified coverage for a dwelling house and attachments, a brick house, and three barns, one identified as a carriage house. The former company’s office building still stands in Watertown. Personal communication in May 2016 with the Jefferson County Historical Society in May revealed that only recently that the firm’s business records had been donated to the society.

A much more detailed description of November 1883 fire appears in the Schenectady Daily Union. The reporter provides his readers a detailed story of an extensive fire, a possible cause, losses, and the kind and a successful response made by Italian laborers living in the vicinity to save the house by use of what appears to have been a bucket brigade which transported water from the river to the terrace above to dose the embers. (8)

Sometime before 1886, the Mabees built another barn on the stone foundation of the former barn. A property survey of 1886 by William Dorn shows a single building at the same location as a former barn. Other outbuildings were likely constructed to support the activities of the farm in the barnyard, but Dorn’s survey in that year shows only a barn. (9)

The second great fire occurred 87 years later on the evening of October 10, 1970. An article in the Schenectady Gazette on October 12 provides information about the circumstances of the fire, suggesting possible arson. There is no mention of insurance in the newspaper account nor could a record be found among family papers. (10)

During the years following the fire and the discontinuation of agriculture at the farm, the barnyard became overgrown with trees and brush, east of the former white picket fence that had extended north and south between the boundary of the farmhouse yard and barnyard. Trees with extensive roots and brush were gradually removed starting in 1996 in anticipation of proposed reconstruction of a Dutch style barn in the barnyard. The task exposed the extent of the 1970 barn fire. Debris extended from the remnants of the stone foundation to the embankment overlooking the river.

From 1998 to 2003 the site of the burned barn location and an area adjacent and north were periodically shovel tested for buried evidence in preparation for the reconstruction of the Dutch style Nilson Barn from Johnstown. Staff from Hartgen Associates, Inc. and members of the Community Archaeology Program-Schenectady County Community College (CAP-SCCC) worked together to investigate this section of the barnyard. A wide variety of artifacts, including pottery, farming equipment, auto parts, tools, glass, and a portion of a melted weather vane (perhaps which once was mounted on the roof), were recovered confirming newspaper accounts of the former barns. (11) The surface of the site of the burned barns was covered with a protective soil fabric and covered by topsoil in 2010 to preserve the site for possible future study. (12) Since the construction of the Nilson barn other outbuildings have been added to the barnyard. Today with the Franchere Educational Center and all the buildings at the Farm constitute a public presentation by the historical society of an 18th -19th century agricultural teaching/learning educational setting and resource for the community and New York State.

Undoubtedly there have been other fires or close calls unknown to us today, often caused by lightning or sparks from a fireplace or stove upon a vulnerable surface. Their evidence may be uncovered in the future.


Looking Ahead from the Present

However, people of resiliency regroup and move on, often with different objectives but based on values they hold. The historic landscape changes, each reflecting opportunities taken with available resources. Today the barnyard offers the visitor a sense of order and purpose but formed by many events maybe never to be known. While documents are helpful to understanding the recorded past, archaeology continues to provide researchers with unwritten and sometimes unknown evidence that will continue to enhance knowledge of the past, dispel legends and reveal evidence of the lifeways along the Mohawk.

2. Original document held by the SCHS.

4. Eva Chiamulera. The Van Antwerp-Mabee Farm, 1684-2000. Analysis and Proposal for Its Construction to a Museum Accompanied by a Historical Account of the Residents, Buildings, and Landscape of a Dutch-American Farm. A Thesis, Cornell University, Masters of Arts Degree, August 2000, pp. 129-133.

5. Barnyard, unknown photographer, in the photo/slide collection of the SCHS; the image appears in Chiamulera’s thesis, p. 143.