The Marquis de Lafayette in Schenectady

Thanks to library volunteer Diane Leone who helped research this post.

In the excellent new-ish musical Hamilton, a hip-hop musical based on the life of Alexander Hamilton (which sounds crazy, but it works), the Marquis de Lafayette is referred to as “America’s favorite fighting Frenchman." He certainly was one of Schenectady’s favorites and similar to other towns and cities in the United States, Lafayette made a deep impression on the residents of Old Dorp.

Lafayette first visited Schenectady in 1778 during the American Revolution to investigate a conspiracy that supposedly involved some residents of Schenectady. He concluded that the suspicions of a conspiracy were “very far from groundless” in a March 3rd report to the Albany Committee of Safety.  He personally questioned a suspected soldier about the conspiracy and while he could not retrieve a confession, Lafayette was sure that there was a treasonous plot forming in Schenectady.  The suspicion was based on a report that British Major Christopher Carleton, nephew of Canada’s Governor Guy Carleton, was seen in Schenectady making preparations and gathering information. An attempt was made to capture Major Carleton and Lafayette even offered a reward of fifty guineas for his arrest. Lafayette’s suspicion was correct and Major Carleton went on to run a very successful raid along the shores of Lake Champlain in the fall of 1778.
﻿﻿﻿﻿﻿﻿﻿﻿
Lafayette’s second visit to Schenectady occurred on his momentous tour of the United States which began on August 15, 1824. According to Larry Hart, Schenectady’s Common Council created a committee in 1824 to convince Lafayette to visit Schenectady. The committee was made up of some of Schenectady’s most prominent citizens including Union College President Eliphalet Nott, James Duane and John Vrooman among others. This committee met Lafayette on his way from New York City to Albany and while Lafayette couldn’t make the visit right away, he promised to visit the next year.  The newspaper, The Schenectady Cabinet had been dedicating a page per issue to Lafayette’s visit to America. The Cabinet was so sure that Lafayette would visit Schenectady after his trip to Albany that in their September 7th, 1824 issue they stated that “La Fayette, it is understood, may be expected in this city within a few days.” The proclamation was a bit premature, as Lafayette was not able to make his visit until June 11, 1825 on his way back from Little Falls.
﻿﻿﻿﻿﻿﻿﻿
Schenectady was more than ready for his scheduled arrival. As Lafayette was traveling down the partially constructed Erie Canal from Little Falls on the day before his Schenectady arrival, members from an arrangements committee traveled up the canal to meet the esteemed general and his party. When the committee reached Lafayette, a messenger was sent back to Schenectady to tell everyone what time he would be arriving. At 7 p.m. on Saturday, June 11, cannons and heavy artillery that were set up on the canal bridge near Water Street shook Schenectady, notifying its inhabitants of Lafayette’s arrival.  According to a September 26, 1933 recollection of the visit from the Schenectady Union-Star, “All was bustle and suppressed excitement. The people crowded the canal bridges and assembled on both banks of the canal all the way from the flats to the City Hall.” The continuous shout of “Welcome Lafayette” rang along the streets. The packet boat that carried Lafayette and his party eventually reached City Hall where they were greeted by Mayor Isaac Schermerhorn. He was then introduced to the Common Council and surviving Revolutionary War heroes. Over forty years after the end of the American Revolutionary War, General Lafayette still recognized James Lighthall, one of the veterans who served with Lafayette during the war. Lafayette went on to express his appreciation to Schenectady at a dinner in the Givens Hotel by saying that “Schenectady had been most kind in times of danger to a young commander who now comes here after a lapse of 47 years, to offer his affectionate devotion, good wishes and the tribute of his old and new feelings of respect and gratitude.” Lafayette's visit to Schenectady only lasted three hours, but his legacy resonated with its residents.
﻿﻿﻿﻿﻿﻿﻿﻿﻿﻿﻿﻿
﻿

﻿﻿﻿
Lafayette Street is one of the most prominent examples of the Marquis' influence here. When a new street was to be opened in the early-1800s citizens of Schenectady suggested naming it Lafayette Street instead of Division Street.  The Common Council agreed and unanimously voted to name it Lafayette Street. Lafayette’s visit influenced the arts in Schenectady as was witnessed in a play called The Pageant of Schenectady by Constance D’Arcy Mackay. The Pageant of Schenectady was produced in 1912 and featured Lafayette’s highly esteemed visit. It was a five-part play commemorating the 250th anniversary of the founding of Schenectady. Performed on May 30th through June 1st in 1912, it follows Schenectady’s history from the early Native Americans to “The Intellectual and Industrial Forces of the City of Today.” Lafayette’s visit to Schenectady apparently stuck out in the mind of the playwright who dedicated an entire episode of the play to Lafayette’s arrival. Titled “The Welcome to Lafayette”, this episode follows Mrs. Van Epps, Elsbett Van Epps, Barent Sanders, and a group of children as they organize a reception for Lafayette. Mrs. Van Epps remarks that “To think of him is to remember the cause of American Liberty.”

Lafayette’s death also had a lasting impact on several Schenectadians including Union College philosophy professor Harold A. Larrabee who wrote a poem in 1934 titled "Lafayette at Schenectady." The poem was presented at Union college in 1934 to commemorate the 100th anniversary of Lafayette’s death and is a moving and interesting recollection of Lafayette’s life and his visit to Schenectady.  It is steeped in history and in the foreword Mr. Larrabee states that the poem is “based on authentic records, and sources could be cited for nearly every line.” 27 years after Larrabee’s poem was recited, Mayor Malcom E. Ellis proclaimed May 20, 1961 as Lafayette Day in Schenectady. In his proclamation, Mayor Ellis said that he “enjoins all of our citizens to pay grateful homage to the memory of Marquis de Lafayette by appropriate civic ceremonials.” While “appropriate civic ceremonials” doesn’t sounds all too exciting, Ellis’ proclamation shows that even over 100 years after his death, the people of Schenectady were still thinking of Lafayette and wanted to honor his memory.
﻿﻿﻿﻿
Posted by The Librarian at 12:42 PM 6 comments

Before the rise of Email and Facebook, postcards were a quick and easy way to keep in touch with friends and relatives. Postcards really became popular at the turn of the 20th Century and postcard collecting, uncommonly known as Deltiology, followed soon after. One such collector was former Glenville resident, Wayne Tucker. Mr. Tucker passed away recently and  graciously willed his postcard collection to the Schenectady County Historical Society. Mr. Tucker was an avid collector of postcards and the donated collection comprises 19 binders filled with thousands of postcards, trade cards, and other ephemera. The majority of the postcards relate to the City of Schenectady, but they also cover many of the towns and villages in Schenectady County. The collection is quite comprehensive and will often have postcards of the same place or landmark from different years, showing how it developed over time. Since there are postcards from various time periods, the collection also shows how postcards evolved over time. Below is a sample of the collection, but be sure to visit the Grems-Doolittle Library at the Schenectady County Historical Society to view the whole thing.
﻿﻿﻿﻿ 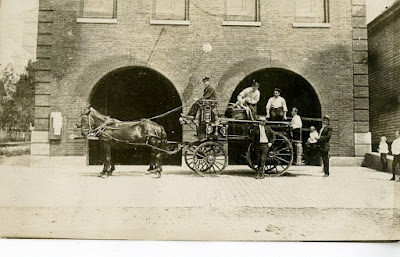 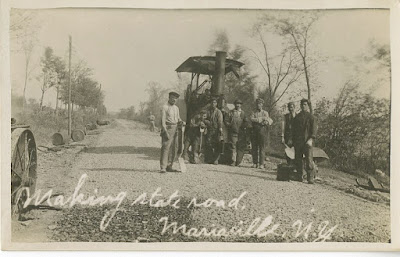 ﻿
Many of the real photo postcards show scenes from everyday life. The first postcards features the Scotia Fire Department, along with the baby of  one of the firefighters. The second shows men working on Mariaville Road/State Route 159. 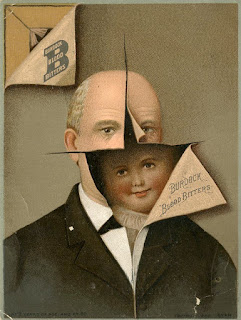 Along with postcards, this collection also has quite a few trade cards. By the 1880s, many businesses used trade cards to advertise their goods. This card advertises the rejuvenating powers of Burdock Blood Bitters. 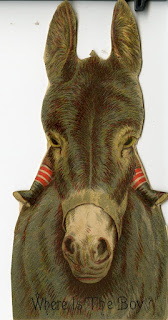 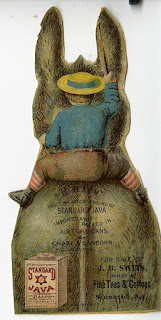 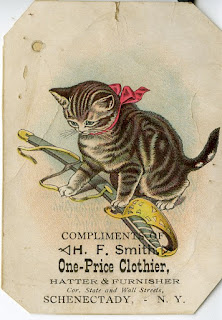 Similar to modern advertisements, businesses used cute animals and kids in their advertisements. I'm not sure what a cat playing with a sword has to do with H.F. Smith's One-Price Clothier, but I would shop there after seeing this card.﻿

Staff and volunteers have started indexing this collection and the index should be on our website in the next few months. A big thanks goes out to Wendy LeBlanc and the family of Wayne Tucker for facilitating the donation.
Posted by The Librarian at 10:30 AM 0 comments