This post features a few festive photos from our collection showing Christmas over the years.

From Saloons to Soft Drinks in Schenectady

While researching The Union Inn for a recent Daily Gazette story (https://dailygazette.com/article/2016/12/13/schenectady-s-union-inn-building-sold-to-local-businessman) I noticed that there were many (over 100) businesses listed under the soft drink section of the 1921 Schenectady City Directory business listings. "Schenectady sure loved soft drinks" I thought to myself, not immediately realizing the implication of the term soft drink in prohibition era Schenectady. I continued my research into 1919 where there were 110 saloons and cafes in the 1919 directory, and it all fell into place.

When prohibition put the kibosh on alcohol sales, brewers, distillers, and saloons needed alternate products if they wanted to survive. Some of the largest breweries around today were the ones that found creative solutions to the prohibition problem. Coors started a ceramics business that surprisingly makes more money than the brewing side of the company. Yuengling made ice cream until about 1985, and then started back up again last year. Others large brewers made barley or malt syrup, low alcohol near-beer, and of course, soft drinks. It was the same story with brewers in the Capital Region many began making sodas, malt vinegar and syrup, and some breweries went into the bottling business.

With many of their main suppliers turning to soft drink production, saloons would soon follow suit and sell those products. Many of the saloon owners in 1919 Schenectady City Directory are the same selling soft drinks in the 1921 directory. Some of them were probably legitimately just selling soda such as the Schenectady Coca-Cola Bottling Company on Foster Avenue. Others, were definitely selling hard drink in addition to their soft drinks. These soft drink establishments were scattered throughout the city although the streets around lower Broadway seemed to have the most.

A letter to the editor in the February 18, 1925 issue of the Schenectady Gazette takes aim at these soft drink places, "If one has the inclination and the price he or she can easily obtain whiskey, alcohol, wine or beer. And this is prohibition Shades of-- somebody: "Soft drink places!" Oh yea. Please pass the salt." The writer goes on to say that "If Captain Funston or the police want to check crime, it might be well for them to look after places where crime is hatched and bred."Another letter to the editor by A Thirsty Schenectadian laments the quality of good soft drinks to be had in Schenectady, saying that he wouldn't miss alcohol or beer as much if there were better soft drinks to be had. He complains that he has gone to soda shops up and down Schenectady but has yet to "find a drink that doesn't need a cold glass of beer to destroy the awful taste." He goes on to compliment the soda shops of Richmond, Virginia where you could find a "10 ounce drink made from fresh fruit with an appetizing taste for 9 cents" where in Schenectady you get warm lime phosphate in a 5 ounce glass for 6 cents."


By 1924, both Albany's Mayor William Hackett and Schenectady's Mayor Campbell were on to the "soft drink" game in their city's. Hackett had recently enacted a measure to close up the "undesirable saloons and so-called soft drink" places throughout the city and Campbell met with him on February 2nd to discuss the ordinance. I haven't been able to find evidence of a soft drink ordinance in Schenectady but similar ones were passed in other towns and cities in the area.

Over time, Schenectady's love of "soft drink" establishments had dwindled. The creation of the special service squad of the Schenectady Police Department helped put many these businesses. Created in 1927, they conducted 600 investigations into disorderly houses, gambling houses, and disorderly places in that year.  The end of prohibition further reduced the number of soft drink shops and only 8 of these soft drink shops were listed in the 1935 city directory
Posted by The Librarian at 10:40 AM 0 comments

Email ThisBlogThis!Share to TwitterShare to FacebookShare to Pinterest
Labels: Prohibition

When I think of Harry Houdini the first thing that comes to mind are his wild escape acts, mind bending illusions, and amazing feats of physical strength and stamina. A lesser known aspect of Houdini's life was that in the 1920s, he began to focus on debunking spiritualists and psychics. His training in sleight of hand and audience manipulation gave him a keen sense on how to expose frauds, although it didn't hurt that Houdini and his wife would use similar spiritualist tricks when they were strapped for cash.

His most famous run-in with a spiritualist occurred during a séance with his friends Arthur Conan Doyle and his wife Lady Jean Conan Doyle, Arthur Conan Doyle's wife. The Doyle's were touring the United States to lecture about Spiritualism. Lady Doyle claimed to be a medium and wanted to conduct a séance to contact Houdini's mother. Houdini's wife, Bess, had previously warned him that Jean had been asking questions about his mother, but Houdini agreed to the séance anyway. During the séance, Jean appeared to fall into a deep trance and began to transcribe what Houdini's mother was transmitting from beyond the grave. Houdini immediately found problems with the sance. He was born in Budapest to a mother who did not speak English and a father who was a rabbi. The first thing that Lady Doyle drew when she went into a trance was a cross and then she proceeded to write everything down in English.

After the séance, Arthur told the press that Houdini had been converted to the religion of Spiritualism. A bit miffed at the untrue accusation, Houdini publicly stated that the séance made him even more skeptical of spiritualism. This exchange put a heavy strain on their friendship and Houdini decided to put on his own anti-spiritualism tour. This tour eventually evolved into Houdini's "3 shows in 1" tour that he would bring to Schenectady in mid-October, 1926. During his three day stay in Schenectady, he gave a lecture on anti-spiritualism at Union College, performed his magic act at the Van Curler Opera House, exposed a Spiritualist that he believed to be a fraud, and gave an address on WGY. 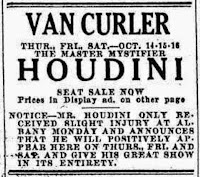 Houdini injured his ankle just days before in Albany while performing the Chinese Water Torture Cell at the Capitol Theater. The injury almost caused him to cancel the rest of his tour, but the Van Curler took out an ad ensuring that Houdini "will positively appear" at the theater. There was a clause in his contract stating that if Houdini was to cancel any show due to illness or injury, he would have to pay the theater $1,000 per day. The blog Wild About Houdini states that Houdini wrote an urgent letter to his manager from the dressing room of the Van Curler Hotel where he threatened to cancel the tour if his manager did not remove the clause.

"I am amazed any sensible manager would sign a contract with such a clause in it and I am perfectly willing to leave the road before I would take such a chance. [...] Am perfectly willing to continue if a new clause is inserted but under the present contract I retire gracefully."  -Houdini's letter to his manager, written from the dressing room of Schenectady's Van Curler Hotel.

The injury caused Houdini to switch up his act a bit and he couldn't not perform his best trick, presumably the Water Torture Cell, but ever the crowd-pleaser, he replaced it with five others. An article from the October 15, 1926 issue of the Schenectady Gazette stated that Houdini performed hundreds of tricks during his act and that while his magic show clever, the best part of the show was his performance exposing spiritualists and mediums. Houdini put on a fake séance and invited several audience members to join him on stage, revealed how spiritualists used their charms and interviewed a woman who had went to several mediums in Schenectady. According to the mediums, she had many deceased husbands and children in heaven. The audience got a kick out of the reveal that she had never been married and had no children. You can find the Schenectady Gazette's review of Houdini's show here at fultonhistory.com.

Houdini's stay in Schenectady was lively despite the injury that almost caused him to cancel the whole tour. The injury that he received in Albany is believed to be a direct cause of Houdini's death although there is debate as to whether he was suffering from acute appendicitis and did not realize the symptoms. Houdini would die just 16 days after his last performance in Schenectady due to complications from appendicitis.

Thanks to the blog Wild About Harry , fultonhistory.com and Don Rittner's article on Albany's role in Houdini's death.


-Mike Maloney
Posted by The Librarian at 10:10 AM 1 comments